Excited About the Apocalypse

A lone wolf in the wilderness— just like you. Hah, get it?!
Source: Kickstarter/Hinterland Games

When I first heard about survival simulator “The Long Dark” from Hinterland Games, I got really excited. To be honest, one shouldn’t get this excited about the demise of our modern lives, even if it’s in a video game— but I am.

It could be that Hinterland Games is a completely new indie company formed by developers, designers, and writers who have been in the industry for a while. Some of them hail from BioWare, Riot, Relic, and Activision (just to name a few); they’ve individually had experiences with major titles like Mass Effect, God of War, Star Wars: Knights of the Old Republic, League of Legends, and Warhammer 40K (again, just to name a few). Creating Hinterland Games from such a pool of talent is pretty much forming up gaming Voltron.

It could be that “The Long Dark” boasts a soundtrack by composers Cris Valesco and Sascha Dikiciyan, whose names I came across for the first time while listening to the tracks for Mass Effect 2‘s DLCs. One might say I’m a little biased already, given my love of game soundtracks, Mass Effect, and, as a result, Valesco and Dikiciyan’s work.

It could be that the game is set in the cold, beautiful expanses of Canada. The company itself is based in N. Vancouver Island. My bias might stem from my love for Canada and the many good memories I have of time spent in British Columbia.

It could be that, thanks to being set in beautiful, scenic Canada, the art style is simple, unadorned, and incredibly appealing to the eyes. This is the world plunged into darkness after our technology goes kaput, after all. So you want “haunting?” Yeah, they have that. A feeling of utter isolation and loneliness? Yep, got that, too. Oh, and don’t forget “danger.” The scene before you might be pretty, but it’s also hiding a trove of unknown threats. This is PvE (Player versus Environment) in the most literal sense, and that environment looks pretty darn good. 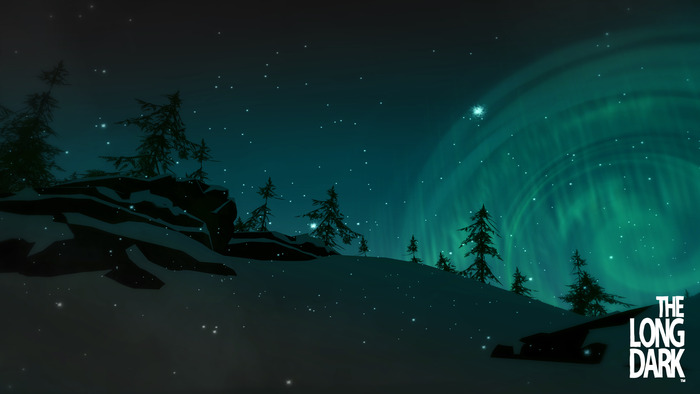 If “hauntingly beautiful” had a dictionary entry, this would be next to it.
Source: Kickstarter/Hinterland Games

It could be that the game is designed to focus the player on the game’s story, environment, and, of course, the protagonist’s survival instead of combat mechanics. Rather than send hordes of AI enemies at you throughout the game, every day is a fight against Nature, the elements, and who knows what else. It’s a rather refreshing shift in perspectives, especially in a gaming industry inundated with “shoot ’em up” action games that keep things moving primarily through combat.

Speaking of story, it could be that I’m a sucker for a very good story in video games. Here, I’ll let the introduction from the game’s Kickstarter page do the talking:

Stranded far from the closest human habitation — lost, wounded, alone, and with wolves circling — Mackenzie will have to quickly master basic wilderness survival skills if he’s to last long enough to understand what he just witnessed, and how his world has just changed.

And that’s only the beginning.

If you’re wondering about the protagonist and whether he has a back story, wonder no more. OF COURSE HE HAS HIS OWN STORY.

Many people have pointed out my bias toward “The Long Dark” might be the voice acting talent Hinterland Games has slated for the game. If the character’s voice in the video sounds familiar, that’s native Canadian Mark Meer of Mass Effect fame as the protagonist, William Mackenzie; he voiced Commander BroShep— or the male Commander Shepard, if you’re so inclined— in all three ME games. The second voice actor announced for cast of “The Long Dark” is fellow Canadian Elias Toufexis, who’s probably best known in the gaming world as augmented hero Adam Jensen from Deus Ex: Human Revolution.

In short, that’s some fantastic acting talent in one game, folks.

Readers of my blog, Twitter feed, and those who are stuck with me in real life know:
1) Mass Effect is “that one game series Tori never shuts up about”
2) Deus Ex: Human Revolution is “that one other game Tori never shuts up about”
3) Tori had a weird, library-related dream involving Mark and Elias one morning— which, incidentally, was mere hours before the announcement that Elias had joined the cast— and hasn’t shut up about that, either.

Not included in the GIF: “SQUEEEEEEEE!” Source: Google Images/Tumblr

Well… Rejoice, everyone! There’s a new game I can’t shut up about and I haven’t even played it yet. In fact, I’ve already given them my money. That’s how excited I am for “The Long Dark.” Some of you might also be wondering about what sorts of spiritual, socioanthropological themes I’ll extrapolate from the game to help make the world a better place. Don’t worry, because I’m excited to see what I find, too, and will likely write volume upon laborious volume on the subject.

“The Long Dark” shows us a glorious, beautiful end of the world and life as we know it—without zombies, aliens, giant lobster-robots with lasers, flashy special effects, or revolutionary combat mechanics. Just you, the wilderness, and your wits.

By the way— There’s nothing wrong with zombies, aliens, etc. Far from it. My kill log is filled with undead, aliens, undead aliens, and the sort. It’s just, as I said, rather refreshing to see a game take a different approach to the post-apocalyptic survival genre. And, frankly, that’s probably what gets me so excited about the game. To me, that is revolutionary and awesome.

While Neil Gaiman and Terry Pratchett took the apocalypse and made it hilarious in Good Omens, Hinterland Games is making the end of the world visually, emotionally, and, dare I say, psychologically riveting.

There’s only seven days left in the Kickstarter campaign to fund the project. I’ve already made my pledge (and it’s also the very first project I’ve backed on Kickstarter). Head on over to the game’s Kickstarter page and see more for yourself. Then, if you like what you see— or, perhaps my oh-so suave words have swayed you— make your own pledge to help the devs get to their goal.

PS: Hinterland Games is hosting an AMA over on Reddit this afternoon at 3PM EDT— perfect time to ask your questions and say hi!

3 Responses to Excited About the Apocalypse